In these Summer months of 2020, Senegal must face, like other countries of Sub-Saharan Africa, a health crisis  with the Covid-19 impacting its major projects & a climate crisis including the price of raw materials, all of these in a state of predominant informal economy (in terms of employment) and early de-industrialization.

To help relieve this situation, Senegal has decided, through the PSE, to use the arrival of major Oil & Gas Projects as a catalyst for its re-industrialization which will benefit other sectors such as Renewable Energies, Mining … 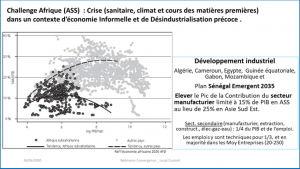 Senegal, a historic oil country, reappears in the club of major gas producers.

Senegal has a long experience in the oil sector, its National Oil Company of Senegal, PETROSEN was created 40 years ago. It is in charge of promoting oil potential and exploiting resources (upstream and downstream).

The Gadiaga field (Fortesa) is currently the only producing field of gas for the past 25 years with a pipeline to supply the Sococim power plant.

The Subsea’s equipments are contracted through  GE/Baker Hughes and McDermott.

The Sangomar Project (SNE), of Woodside (Operator), Cairn Energy FAR and Petrosen, will consist of a set of 23 underwater wells, connected to a FPSO production, storage and unloading vessel (contracted through Modec) which is expected to have a production capacity of 100,000 barrels per day. The Subsea’s equipments are contracted through the Subsea Integration Alliance (OneSubsea and Subsea7). OneSubsea (company will provide the  equipments and Subsea 7 for flow lines.

While many local content opportunities exist in offshore production facilities, their implementation depends on decisions initially taken by the national authorities, in consultation with the operating company and the EPC contractors involved.

The law of February 1st, 2019 on Local Content must be specified by implementing decrees that remain pending. These decrees, which are not retroactive, will not apply to “recorded” projects such as GTA (phase 1) and Sangomar (SNE).

These projects have been “defined, validated and approved via their development or exploitation plan. The new law will apply to future projects that will be sanctioned after its publication. (This could be the case in particular for the Yakaar-Teranga project).

Eiffage has managed to set up the fabrication of the breakwater dike, consisting of 21 concrete caissons of 16,000 tons in Dakar, while the landing will be prefabricated by Saipem (in elements to be assembled) in the yard of Karimun in Indonesia.

Regarding phases 2 &3 of GTA, BP has just issued its suppliers a request for the reduction of Capex and the search for new ways of partnership and technical solutions (liquefaction, gas transport…). It would be appropriate, however, to maintain the pressure for the development of Local Content with the involvement of local structural engineering structures (e.g. Laxone/Safier) and metal construction structures (e.g. Chantiers Navals Dakarnave)

Regarding SNE, shares of Local Content could still be identified in particular regarding the subcontracting of the FPSO by Modec and the supply of Surf equipment by Subsea 7.

The country has a refinery (SAR) being extended/renovated (with 70% Local Content), oil stocks and obviously oil-fired thermal power plants and renewable energy plants. These oil-fired power stations will have to be renovated when they switch to gas as soon as the latter is available.

Other industrial assets of the country include: mines, cement factories, chemicals (production of phosphoric acid and fertilizers from phosphate), the maritime sector, the manufacture of machinery and building materials.

The needs of the Senegalese economy of oil & gas and other sectors in the longer term will contribute to the reduction of youth unemployment by a better match of the supply and demand of national labour in sectors with high demand for labour. 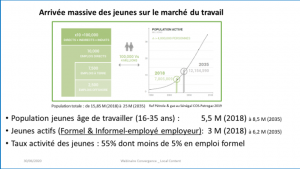 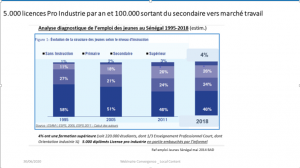 If the graduates of short higher education want to be able to fill the positions of senior technicians/engineers linked to the development of the sectors (Oil &Gas, mining, energy, marine), the following reforms need to be done in the local universities (ESP, EPT and Gaston Berger):

In the intermediate period, it would be useful to rapidly develop a training course/adaptation to the positions to be filled.

With regard to secondary school leavers, it was decided to create in the city of Saint Louis, a vocational training centre for the Oil & Gas, Energy and Mining sectors, as was done with the Centre de Formation Métiers Portuaires et Logistique (CFML), launched in 2011 (see below).

Concerning all levels and on the basis of the needs identified, it is a question of developing new courses referring to professional skills not sufficiently present on the Senegalese market, particularly in the technological sectors linked to international standards (HSE, international certifications in welding as well as in drilling…).

The activities of the ACP group have been impacted by the country’s economic crisis, which has mainly accelerated since 2016. Mining activities that could have generated training or local content projects have not been successful. There is no visibility in this sector. On the recruitment side, most of the large companies suspended their recruitment programmes during the period.

In this specific context, the ACP group of Pointe Noire has not been able to evolve towards project developments. 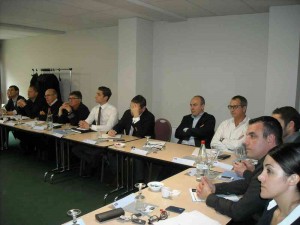 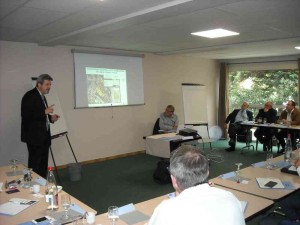 As announced at the 2016 General Assembly, we launched our MEDAF Regional Pole with 20 local members (partners and individuals) of our association and our guests with the aim of identifying and developing synergies to respond to local and international opportunities (Mediterranean, Africa).

To help us do this, Jean Michel Diaz, the  PACA Regional Delegate at Total, and Anthony Mazeau (Eiffage, offshore wind turbine) participated in our reflection.

Many areas of interest were identified by the members of the group, during the round table: various operations on pipes, opportunities in Mexico by Eosys, in Algeria via ICAT, PIICTO Total project, Ecole Oleum Sud Total, refining of HVO vegetable oil, training needs among channelizers, with the IRA or in Africa, possibility of expertise for the insurer GM Consultant (Bertrand Chaugny in charge of  Middle East Africa, who has just joined the ACP), possibilities to expand applications in Cathodic protection (wind, boats, ports, tanks) in particular via members of the Club de la Mesure.

The Total PACA Regional Development is mobilized as part of the restructuring of the La Mède refinery (world-class bio-refinery, development of a logistics and storage platform for refined products, construction of an 8 MW photovoltaic farm, and creation of Oléum Sud, training school with use of units stopped for in situ training in maintenance , control command … ).

In addition, Total, as part of its regional development (PACA) has undertaken, after the success of the Oléum Nord training centre created as part of the conversion of the Dunkirk site, to set up Oléum Sud, a full-scale training centre in partnership with IFP Training, oriented in particular towards training in the exploration and production trades (although without coverage of marine/off-shore specialties).

We have planned to federate our projects within the framework of 6 poles: Refining in Africa // EOR (reactivation of old fields) // Integrity of pipelines // E&P training // Exploration- Drilling in the Mediterranean //Offshore wind turbines.

We met in the afternoon at the Ecole Nationale Supérieure de la Marine (meeting of the Club de la Mesure) where the management of the school welcomed us to study the terms and conditions of an ENSM/ICAT partnership on Total’s Ecole Oleum Sud project.

There is a great complementarity and convergence between our fields of activity, the training and R&D issues attached to them and we have transmitted to Total an expression of interest of the ENSM Marseille to cooperate in order to offer marine / offshore training modules that would complement the Oil and Gas training modules (done by the IFP) to the future Oléum Sud Training Centre.

The Management of this new ACP-CAP CAPM group remains essential as we obtained a lot  of interests among those present to the meeting. This site (see also MEDAF News) will be an opportunity for each of the members or partners to report on their activities, missions, meetings, needs, possible synergies ….”